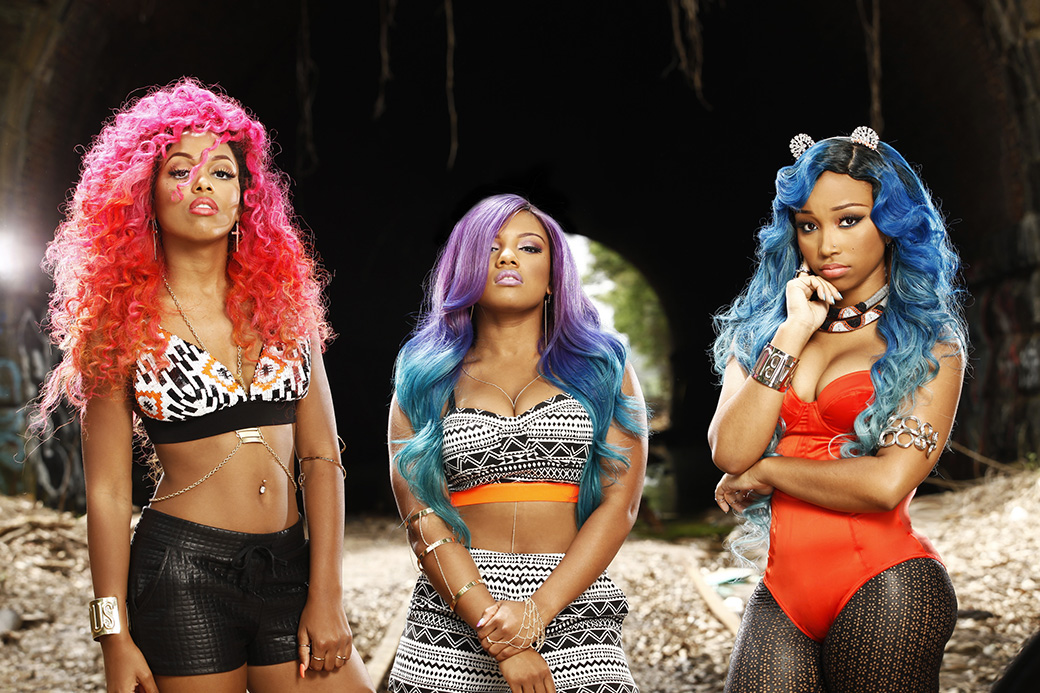 The only thing you’ll be thinking when you hear OMG sing or see them perform while painting your city pink, purple, and blue is, “these young ladies are the next big thing!” Standing on the verge of super stardom, this girl music group, made up of the talented, dedicated and totally gorgeous “STAR” (Zonnique Pullins – 18 years old), “BEAUTY” (Bahja Rodriguez – 18 years old) and “BABYDOLL” (Breaunna Womack – 19 years old) are proving they have a one of a kind sass, swag, intelligence, showmanship and talent. Spreading their message of female empowerment, even their name – Officially Miss Guided – is a play on words; which is just as much fun as each girl’s colorful hairstyle. “Officially” speaking, OMG stands for young ladies AKA “Miss” that are “Guided” in positive ways, hence “Officially Miss Guided.” Their mission is to lead teens and young women everywhere and let them know they can stand together as friends in positivity, true sisterhood, solidarity and still be glamorous, sexy and assertive.

Ahead of the game with standout style, OMG is all about friendship and it’s easy to see why they are as thick as thieves. In fact, STAR and BEAUTY are lifelong friends, as their mom’s have been best friends themselves since they were kids. STAR brings a sexy, prissy element to the group. She’s the quiet, laidback one, but you wouldn’t know that when she hits the stage with raw, exciting, sensual energy. BEAUTY brings a strong, demanding, turn-your-head element to the group. She’s the tough one but wrapped up inside is a feminine, cute fun-loving prankster. BABY DOLL is the animated rapper in the group who loves to dance, very athletic and with a look just as flirty as she is cute and edgy. All together, this powerful female trio makes for a magical dynamic that’s reminiscent of iconic girl groups like TLC, The Spice Girls, and Destiny’s Child.

Grammy Award winning Singer/Songwriter and reality TV star, Tameka “Tiny” Harris, formerly of the multi-platinum girl group, Xscape, formed OMG in 2009 and signed them to her Pretty Hustle record label in 2011. Although STAR and BEAUTY were in the group from the start, BABY DOLL joined the group in February 2010 and immediately bonded with them. Determined to impact the world through their style, charisma, and energetic, urban-pop music, the Atlanta-based OMG are consummate entertainers who give one hundred percent whether in the studio, onstage or conducting interviews.

OMG has been featured on both BETs “The Tiny & Toya Show,” & VH1’s “T.I. & Tiny: The Family Hustle.” However, it was the release of their first official single, “GUCCI THIS (GUCCI THAT),” and their performance on the “SCREAM Tour,” that gave their careers a jolt and garnered them nationwide attention, peer acceptance and fan base notoriety.

The journey really took off in January 2011, when OMG was selected amongst hundreds of entrants to win the opportunity to become the “Next SCREAM Star.” Ultimately they won a slot to perform on the back to school SCREAM Tour – The Next Generation. By being introduced on the SCREAM Tour they broadened their fan base and quickly became sought after celebrities via their electrifying performance. Their never-give-up take the world by storm attitude has really paid off, as OMG continues to prove that being awarded the “Next SCREAM Star” title in 2011 was rightfully theirs.

From the onset of them being signed to Pretty Hustle, OMG’s first official video “GUCCI THIS (GUCCI THAT),” took off and became an instant hit on the Top 10 list of BET¹s 106 & Park. During this same period of time their previous viral video “Pretty Girl Bag,” a remix of Soulja Boy’s “Pretty Boy Swag,” raked in over two million views within ten months of its debut on YouTube. With a concentrated effort to solidify their fan base, in 2012 the trio released their upbeat flirtatious single, “Where The Boys At” which received rave reviews. Shortly there after, Lady Gaga endorsed OMG by proclaiming to her 40 million-plus followers (Little Monsters) via twitter that she was “obsessed with these little cuties.”

Proving they are a force to be reckoned with, OMG received their first NAACP Image Award nomination for “Outstanding New Artist” in 2013. In the spring of 2013 OMG released their first street club banger “Baddie.” This single quickly became a fan favorite as it accentuated the girlz maturity and arrival into young womanhood. In the summer of 2013, the girlz hit the road again to co-star on the “All Around the World Tour” with Mindless Behavior.

OMG fans have been captivated by their latest movement #TheTransformation, which is an undertaking that embodies the girlz new look and sound all before our eyes. With #TheTransformation, comes the official reveal of the “new” OMG and their newest single, “Boy It’s Over” a remake of the Jagged Edge-classic, “Girl It’s Over.” “Boy It’s Over” was written by Jagged Edge’s own hit makers, Brandon and Brian Casey, whom the girlz have been working closely with on other music projects. The new single is sure to bridge a gap between OMG fans of the present and 90’s R&B music lovers of the past.

As leaders of the NEXT GENERATION, OMG is making it their mission through music, style and their philanthropic outreach, OMG CARES; to help young girlz everywhere recognize that they too can be independently strong, beautiful and successful. With a bold sound, and even bolder message, unanimously OMG is destined for “trendsetting greatness.”